n Nov. 5, 2020, EPA published its draft biological evaluation (BE) of atrazine. A comment period ended on Feb. 19, 2021. Many growers and farm organizations submitted comments to the docket. The Biological Evaluation is an assessment of risks to listed endangered or threatened species from labeled uses of atrazine. It also includes a draft ecological effects assessment and determines the toxicological endpoints—the range of acceptable amounts of atrazine in the environment—to be used in EPA’s ecological effects determinations. EPA inexplicably found that atrazine is likely to adversely affect nearly all species and critical habitats in the continental United States, including some that are already extinct.

EPA announced a long-awaited interim decision regarding the reregistration of the triazine herbicides: atrazine, propazine, and simazine.  The atrazine ecological level of concern (LOC) was set at 15 parts per billion (ppb) over a 60-day rolling average.

The Atrazine Preliminary Interim Decision (PID) document published in the Federal Register. While EPA raised the ecological level of concern to 15 parts per billion, Triazine Network leaders call for EPA to solidify the LOC and address poor quality science that remains in the PID.

EPA releases a Regulatory Update on the Registration Review of Atrazine

I want to thank your national organization and several of your members for bringing to my attention some of your concerns regarding the Agency’s data assumptions and interpretations related to EPA’s latest draft ecological risk assessment of atrazine. After considering your input, other public comments from various stakeholders and the clear recommendations of the 2012 Science Advisory Panel (SAP), EPA is already evaluating alternate approaches for inclusion and exclusion of studies, evaluating/scoring, and interpretation of ecosystem and related studies.

EPA releases the Cumulative Human Health Risk Assessment for atrazine as part of the registration review process. EPA is accepting comments through September 24. EPA continues to comb through the comments from the Ecological Risk Assessment from 2016.

Comment period ends for the Ecological Risk Assessment for atrazine. Over 77,000 comments were received.

EPA released its Ecological Risk Assessment for atrazine. In its recommendations, EPA ignored several high-quality studies and instead used studies the agency’s own 2012 Scientific Advisory Panel (SAP) found to be flawed. Using the flawed research, EPA recommended the aquatic life level of concern (LOC) be set at 3.4 parts per billion (ppb) on a 60-day average. EPA’s current LOC for atrazine is 10 ppb, however all credible scientific evidence points to a safe aquatic life LOC at 25 ppb or greater.

On Tuesday, May 3, 2016, EPA removed the Refined Ecological Risk Assessment for Atrazine from its own website, claiming that the signed document was not finalized. EPA officials were quoted in the media as saying the report would be released in “a few months”. EPA’s accidental posting of the report came on the heals of the agency’s accidental posting and subsequent removal of a report on another herbicide, glyphosate.

The report recommends an aquatic life “Level of Concern” (LOC) of 3.4 parts per billion, dramatically lower than the 10 ppb LOC currently being used by EPA.

This refined assessment presents the ecological risks posed by the use of the herbicide atrazine. Based on the results from hundreds of toxicity studies on the effects of atrazine on plants and animals, over 20 years of surface water monitoring data, and higher tier aquatic exposure models, this risk assessment concludes that aquatic plant communities are impacted in many areas where atrazine use is heaviest, and there is potential chronic risk to fish, amphibians, and aquatic invertebrates in these same locations. In the terrestrial environment, there are risk concerns for mammals, birds, reptiles, plants and plant communities across the country for many of the atrazine uses. EPA levels of concern for chronic risk are exceeded by as much as 22, 198, and 62 times for birds, mammals, and fish, respectively. For aquatic phase amphibians, a weight of evidence analysis concluded there is potential for chronic risks to amphibians based on multiple effects endpoint concentrations compared to measured and predicted surface water concentrations. The breadth of terrestrial plant species and families potentially impacted by atrazine use at current labeled rates, as well as reduced rates of 0.5 and 0.25 lbs. a.i./A, suggest that terrestrial plant biodiversity and communities are likely to be impacted from off-field exposures via runoff and spray drift. Average atrazine concentrations in water at or above 5 μg/L for several weeks are predicted to lead to reproductive effects in fish, while a 60-day average of 3.4 μg/L has a high probability of impacting aquatic plant community primary productivity, structure and function. 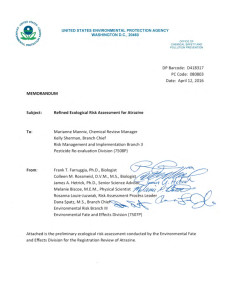 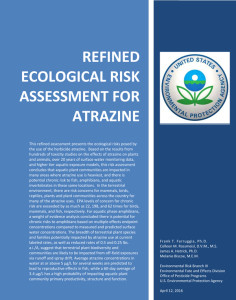 Growers Get Ready to “Fight EPA” Again on Atrazine; Read our letter to EPA